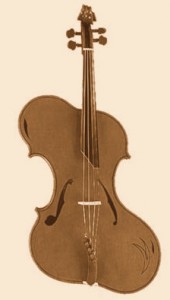 While working on some new tunes outside in the sweltering heat, we were astonished to see Carol’s viola morphing and melting before our eyes. The tone became ever more dark, molten, and lugubrious…until finally, it sounded as if it were being played under water! All seriousness aside, quite a few players have taken to the Pellegrina viola (which has a lot of nicknames we won’t mention here). A huge body size, reasonable string length, and great projection.

We’re happy to be hearing about early airplay of Two Hearts on radio stations such as WAMC (Hudson River Valley), WFMT Chicago (included in 6/26 picks), CKUT Montreal, and KBCS Bellevue/Seattle (heavy rotation). Folk music radio announcers put countless hours into creating beautifully crafted programs, the vast majority on a volunteer basis. They (along with so many who perform, listen, write, and organize) keep the singer-songwriter tradition alive.

As of 7/30, the album has landed in the top 50 on the international Roots Music Report chart (folk), and climbed to #15 on the general RMR Georgia chart.